I am going to jump right into renovation talk. We recently started work at the reno house. Since we won’t be tackling it 100% full time we decided to break up the inside into two parts. This way we have a nice half way point and can feel some accomplishment in stages. We also decided that we would not be doing any major layout adjustments. We are mainly just bringing everything into the 21st century. The first thing on the list is the second floor and the stairway. While clearing out the upstairs and peeling back some vinyl floors we found this……..

What is that? Well, its floor glue but due to the age of the house we thought it might have asbestos in it. We had it tested by a professional company and sure enough it was positive. Fantastic! ::::sarcasm:::: Luckily the company told us the percent was so low that they recommended we not bother with it. For our own sanity we decided to clean it off and seal it down with Behr porch and patio paint (good high traffic paint) before any floors go over it. Asbestos, in this manner, is dangerous only if it becomes airborne so to clean it off I just used a wet rag and went over it multiple times until the water ran clear. It had vinyl flooring on it since the 70s so it needed a good cleaning for sure. I thought I had a photo of the floors after we put down the paint but it’s nothing fancy. It’s basically just a gray seal. Those spots are currently ready for flooring to go down.

Moving on to the restroom. This restroom is a project Chad and I decided we would do together. I know, so sweet! 😉 Here it is before we tore into it.

Everything is pretty dated in here with the exception of a new window installed a few years back. We decided it was going to be a complete gut. However, look at this wallpaper!

You know how they say styles always come back around over time? I believe it. I actually like this wallpaper, not covering as much of the wall surface that it currently was but I did see some beauty in it. I tend to like eclectic designs and décor with hints of bohemian flare so with the right accessories this could work somewhere! The wallpaper was starting to peel in multiple places so it all came down. I carefully removed a few good sections and I plan to keep and reuse them somewhere in the home. This is and was a family home so throughout this process we are trying to leave special reminders of what it once was. Here are some after shots once it was gutted but before all the wallpaper came down. 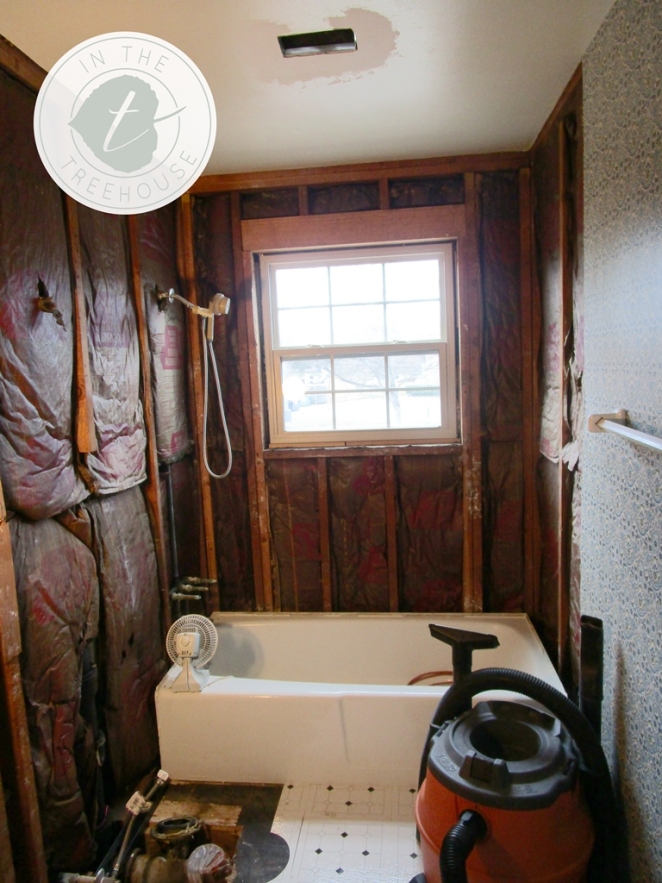 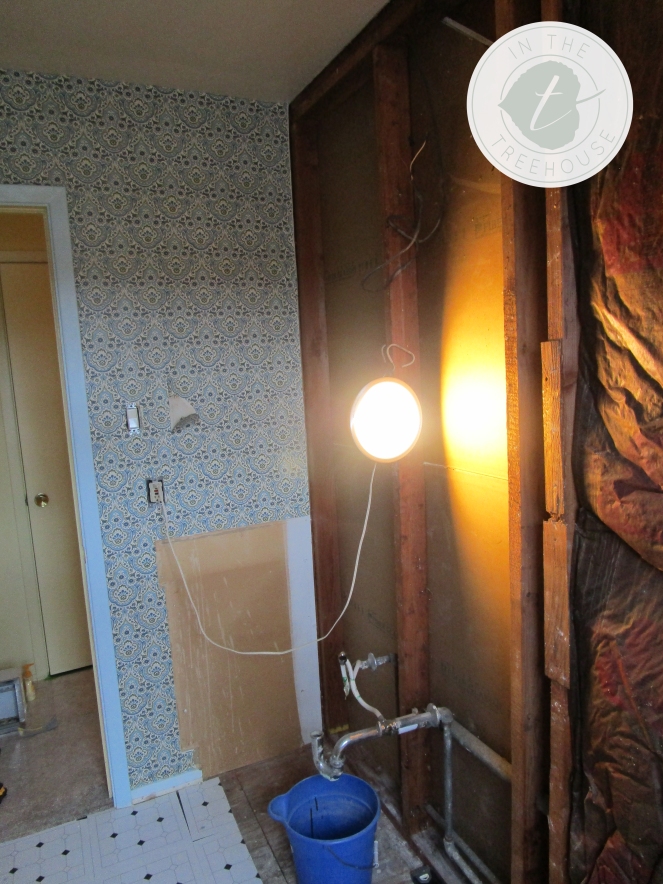 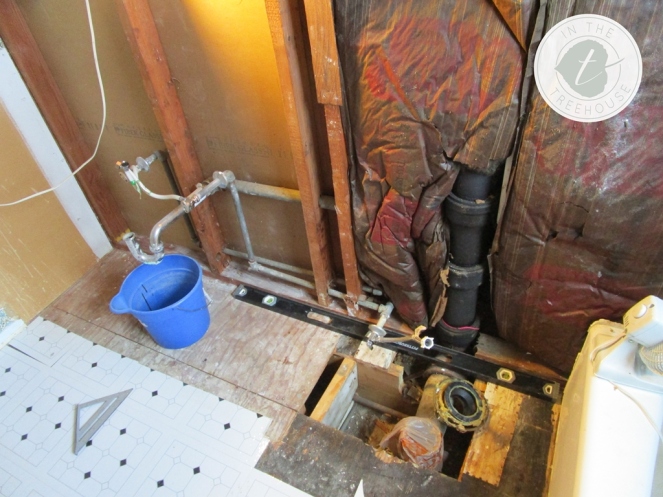 So, what problems did we find in the bathroom? There was a stud missing on the back shower wall. Yikes! Not sure how that section of the wall was being supported but it has since been fixed. We needed to fix some plumbing and move some pipes around so Chad thought it would be best to replace all of the plumbing since the walls are now open. This house was built in the 70s and the pipes, at least in the bathroom, had never been replaced. I gotta brag because Chad did all the plumbing by himself. His stepdad was an  extra set of hands when the water was turned back on just in case things hit the fan but thankfully, no issues. Chad practiced sweating copper daily in the garage until he got it down to an art. I kept seeing the blow torch light up in the garage in the evenings. 🙂 Before we officially gutted the bathroom, we did decide on floors and shower tiles. I’ll save those for the reveal once it’s all finished up.

Last thing I want to show you is the stairway. A little side note, I’d say 85% of this house is covered in paneling and that includes this hallway. Take a look…. 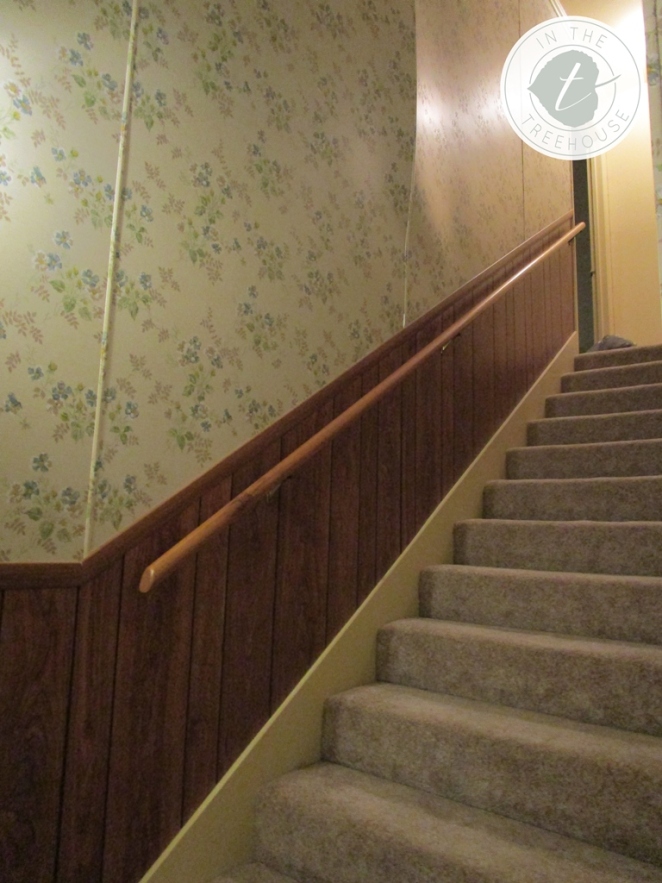 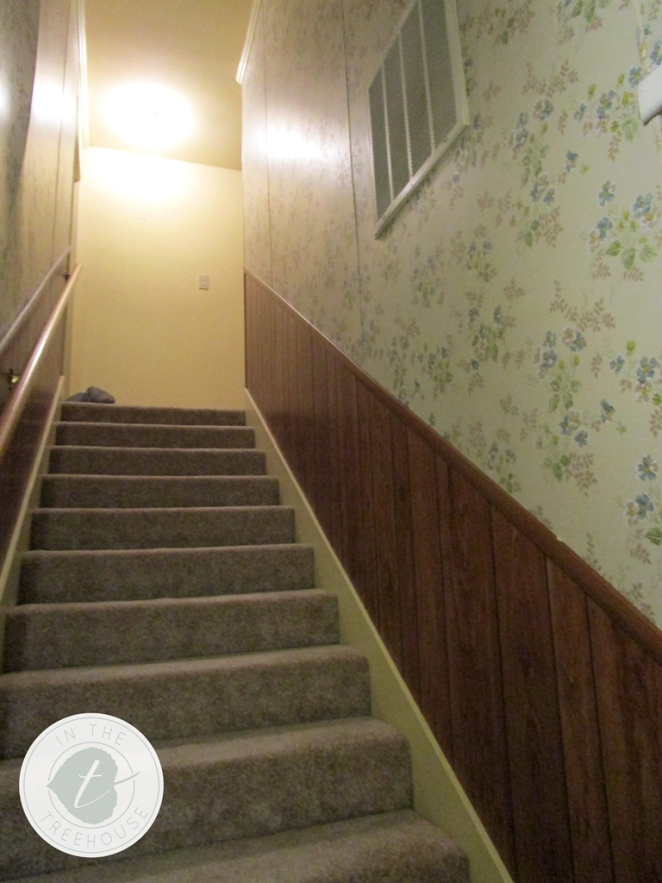 We had hoped the paneling was going to pop off rather easily and the walls would not have much damage. Whelp……. It happened a little different but we have come to grips with it.

Unfortunately the walls are going to need more attention than we had hoped but all still doable. Though we are not doing any major floor plan changes we wanted to see if there was any way to open up the stairway a little bit and not make it feel so closed off. Thankfully, the wall that is closest to the entry was not load bearing so we were able to cut out a section to help open things up. Such a small thing made a huge difference!

When you come through the front door now, or even stand in the formal sitting room, the space feels a little more continuous and not as sectioned off. New balusters and railing will be going in the open space of course.

This gives a little visual perspective of what is going on in the upstairs portion of the house. Things are chugging along and we are able to mark things off the list daily. Currently, Chad is typically doing most of the work while I am juggling the boys. The boys do get to stay with grandma on occasion so we can both tackle sections of the reno and sometimes, when we know a lot of dust and messy stuff isn’t happening, we will go with the boys and have them play outside with one of us while the other is inside working on stuff. I get to do all of the design and finishes so that of course is one of my favorite parts and best of all we can all do those things together without worrying about the boys being in a work zone. Chad’s mom has been a huge help as well and I know she will continue to be a big part of the process. She visits the home almost daily and ties up any loose ends that need some completion. She is also a great painter and has already started, and I think completed, all the baseboards upstairs!

Just like the past few years, we continue to visit Lowes and Home Depot almost daily! I’d almost rather go there than the grocery store, but that’s a whole other topic! 🙂

Til next time… PEACE in, grace OUT!

Welcome! Pull up a chair and get comfy. This blog is a mix of home improvements, design, and how we “do life.” From being a parent and rehabbing homes, to being creative or just not wanting to get out of bed and put on pants kind of stuff. Real life. So start from the beginning and come along for the ride!

Posts from the Past